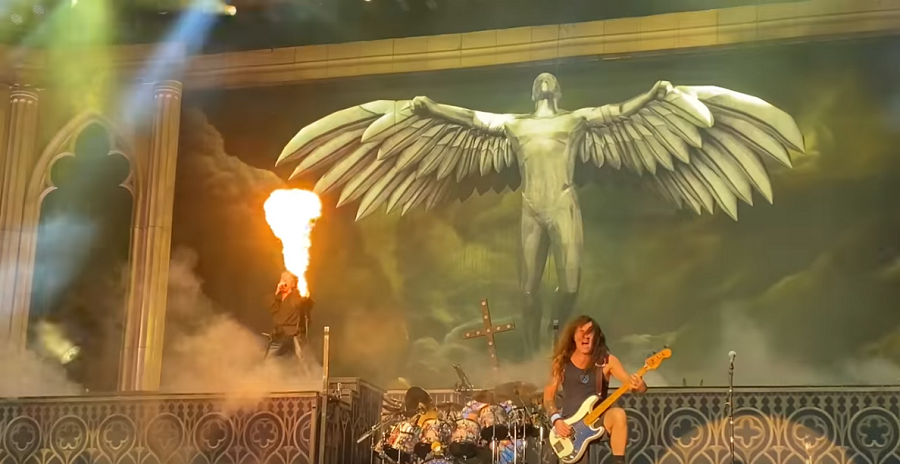 On 11 June 2022, thousands of Iron Maiden fans got the moment they’d been waiting for as the band took to the Apex stage at Download 2022 to close Saturday night.

Stalwarts of the UK’s biggest rock and metal festival, with seven Donington headline performances under their belt, there was an electric energy and enthusiasm delivered by the band and mirrored by the crowd throughout their performance.

Proving they still deserve their place at top of the bill, their Legacy of the Beast set kicked off with three new songs taken from their critically acclaimed Senjutsu studio album.  Bruce Dickinson’s distinctive vocals soared into ‘Senjutsu’ followed by ‘Stratego’ and ‘Writing on the Wall’ all accompanied by a 12-foot samurai wielding Eddie. This scorching opening warmed up the crowd to the spectacle to come as the band launched into iconic classics such as ‘Fear of the Dark and ‘Blood Brothers’.

Commanding the stage, Bruce had the crowd in the palm of his hand. His stage presence and ease of connecting with the audience was a lesson in what a headlining act should be like.

‘Number of the Beast’ drew the set to a close. But – in true Maiden style the band weren’t finished with the fans. They showed once again what marks them as one of the most beloved metal bands as they came out for not one but two encores with classics such as ‘Run to the Hills’ and ‘Aces High’.

Thirty four years since they first headlined at Donington, fans old and new were left in no doubt why Iron Maiden remain one of the best bands in the business.